In our last blog article, we discovered the Dragon Qigong and how it is good for relieving lower back pain and also fear from the kidneys. In this blog, we continue on with the 5 Element Qigong Set for the Tiger Qigong form which is a powerful Qigong form to open tight shoulders, chest, strengthen the legs and muscles around the knees and relieve grief which is often held in the lungs.

“The spirit of the White Tiger combines the courage and fierceness of a soldier with an ethereal, magisterial dignity. In ancient times, the head of the White Tiger graced the shields of soldiers going into battle, the entrances to important fortifications and the bows of the Emperor’s fastest ships.”

The white tiger, for whom this Qigong is named, is the highest of the animals in the Chinese pantheon. It has mystical significance and abilities and as the king of the animals, the white tiger possesses incredible power. It was said that the white tiger would only appear when the emperor ruled with absolute virtue, or if there was peace throughout the world.

The Tiger Qigong opens the lungs, releases grief and stress, and allows us to expand our capacity to breathe. Tiger Qigong begins with the expansion of the chest and with retracting our “tiger claws”, then pushing them out and expelling all our air. Poor lung function can impair oxygenation of blood, and therefore the skin and hair, suffering this loss, can become dry. We know, for example, that smoking (which obviously affects lung performance) is associated with premature aging of the skin. Some TCM (Traditional Chinese Medicine) treatments, in fact, address skin diseases by treating the lungs. The Tiger form may also be utilized to promote greater lung health and ameliorate associated problems.

In terms of emotional release, when someone is grieving, they ‘close up’, often times slumping forward, thus restricting movement and the full expansion of the lungs. We can counteract this with the movements of the Tiger, which deeply open the lungs.

From the standing meditation posture, open by raising both arms forward to the chest level and then dropping them back down to the waist. From here, turn both hands as if “holding a ball”, with the right hand above the left at the level of the navel. From here, step out with the left foot to assume a standard “horse stance.” Again, bring the arms up to the front, but this time draw the hands back so that they are near the shoulders. Now press both palms forward; the fingers should be bent at the tips so as to resemble a “tiger paw.” After that, circle both hands outward and then draw them back towards the shoulders. Turn the palms towards you, facing inwards to stimulate the lung meridian. 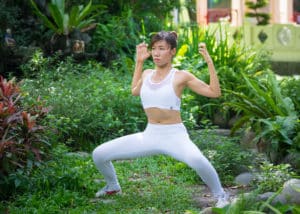 Then, push the arms straight back to stretch the chest and shoulders, extending the wrists behind you. 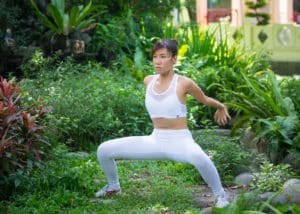 It is important to feel the twist from the lung point all the way in the upper chest to the hand and thumb to get the lung meridian. Turn the hands again, and relax as the hands are drawn forwards and then back to the shoulders in a scooping motion. This completes one whole round; three rounds make a full set.

Once a full set is complete, close by pushing the hands forward and bringing the left foot back so that the feet are again at shoulder width. Allow the hands to drop back to the waist and assume the standing meditation posture.

By pulling the arms back with the elbows up, you really give a good stretch to the chest, deeply opening the lungs. As you press forward and curl the tailbone underneath you compress the lungs and the digestive organs together, completely expelling and squeezing out the lungs.

Effects on the Fascia

The Tiger Qigong engages the Arm Lines through the deep twisting combined with the pushing forward and pulling backward. This has many benefits to people with tight shoulders and chests. I have used this successfully with surfers and weightlifters, who suffer from tightness in these areas. People who work at desks a lot will also greatly benefit from the Tiger as they are in a chest-contracted position throughout the day. Effects on the Meridians Learn more about Qigong for Body Pain online courses and check out our Qigong for Qigong For Shoulders.

You can also see it in action in the 5 Element Qigong Online Course.